It was an honor to attend Stio’s Ten-Year Anniversary in Jackson, Wyoming, in September. More than 100 people were in attendance, including many industry friends and suppliers.

“It seems like just yesterday that I visited founder, Steve Sullivan, and a handful of other employees at the Stio office when they first started the brand. Ten years later, it was incredible to see the entire Stio team gather for a group photo at the event,” said Quick Feat Managing Director, Darrell Kirk. 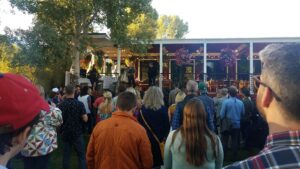